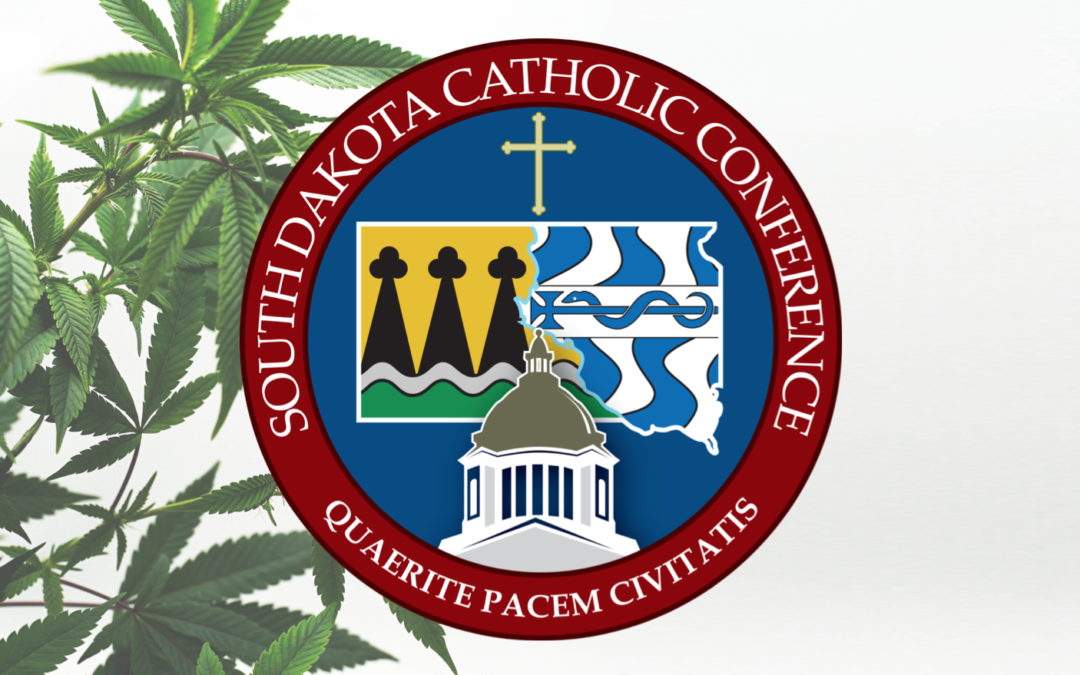 Memorial of the Queenship of the Blessed Virgin Mary

On November 8, 2022, voters will be asked to decide a ballot question known as Initiated Measure 27. If approved, it would legalize the possession, use, and distribution of marijuana for any purpose in South Dakota. We urge Catholics and all citizens to oppose Measure 27 because of the numerous harms it threatens to bring to individuals, families, and our state.

The Catechism of the Catholic Church teaches us, “The use of drugs inflicts very grave damage on human health and life. Their use, except on strictly therapeutic grounds, is a grave offense.” (CCC 2291). Expanding on this, Pope St. John Paul II stated, “We cannot speak of the ‘freedom to take drugs’ or the ‘right to drugs,’ for the human being has no right to harm himself and neither can nor should ever abdicate the personal dignity which comes to him from God!” Likewise, Pope Francis has spoken forthrightly about his views: “No to every type of drug use. It is as simple as that.”

There is a widespread belief in society today that marijuana is a harmless drug. However, this is a myth. Marijuana contains a mind-altering chemical known as delta-9-tetrahydrocannabinol or “THC” for short. Here is what the Substance Abuse and Mental Health Services Administration (SAMHSA) says about the marijuana in common use today:

“Over the past few decades, the amount of THC in marijuana has steadily climbed; today’s marijuana has three times the concentration of THC compared to 25 years ago. The higher the THC amount, the stronger the effects on the brain—likely contributing to increased rates of marijuana-related emergency room visits.”

In 2012 Pope Benedict XVI declared, “It is the responsibility of the Church… to unmask the false promises, the lies, the fraud that is behind drugs.” As your bishops, we believe it is our duty to speak plainly about the harms inflicted by marijuana, not just on those who use the drug but on the entire society. The following statements are direct quotes from the National Institute on Drug Abuse:

Traffic safety: “Marijuana may impair judgment, motor coordination, and reaction time, and studies have found a direct relationship between blood THC concentration and impaired driving ability. Marijuana is the illicit drug most frequently found in the blood of drivers who have been involved in vehicle crashes, including fatal ones.”

Workplace safety: “Studies have also suggested specific links between marijuana use and adverse consequences in the workplace, such as increased risk for injury or accidents. One study among postal workers found that employees who tested positive for marijuana on a pre-employment urine drug test had 55% more industrial accidents, 85% more injuries, and 75% greater absenteeism compared with those who tested negative for marijuana use.”

Education: “Considerable evidence suggests that students who smoke marijuana have poorer educational outcomes than their nonsmoking peers. For example, a review of 48 relevant studies found marijuana use to be associated with reduced educational attainment (i.e., reduced chances of graduating).”

Several studies have shown that marijuana use is higher in states that have legalized this substance for so-called “recreational” purposes, as Measure 27 proposes to do in South Dakota. It is prudent to expect that legalizing marijuana in our state will likewise lead to increased use, and as a result, a rise in the adverse consequences associated with this drug.

As Catholics, we are called to protect the “common good,” which the Catechism defines as “the sum total of social conditions which allow people, either as groups or as individuals, to reach their fulfillment more fully and more easily” (CCC 1924).

When thinking about the question of legalizing marijuana, we must consider how the more widespread use of this harmful drug will hinder the ability of many individuals to live healthy and fulfilling lives. We should consider the social costs, from more dangerous roads to more crowded emergency rooms. The harms caused by marijuana are not limited to only those who use this drug, but rather affect the health of the entire society.

We believe individuals, families and our state will be significantly harmed if Measure 27 becomes law. We respectfully urge Catholics and all South Dakotans to oppose this measure.

The Most Reverend Donald E. DeGrood, Bishop of Sioux Falls

The Most Reverend Peter M. Muhich, Bishop of Rapid City

To learn more about The Pitfalls of Legalizing Marijuana, watch Episode 107 of the SDCC podcast, featured below: