David & Goliath – A childhood story you were taught wrong 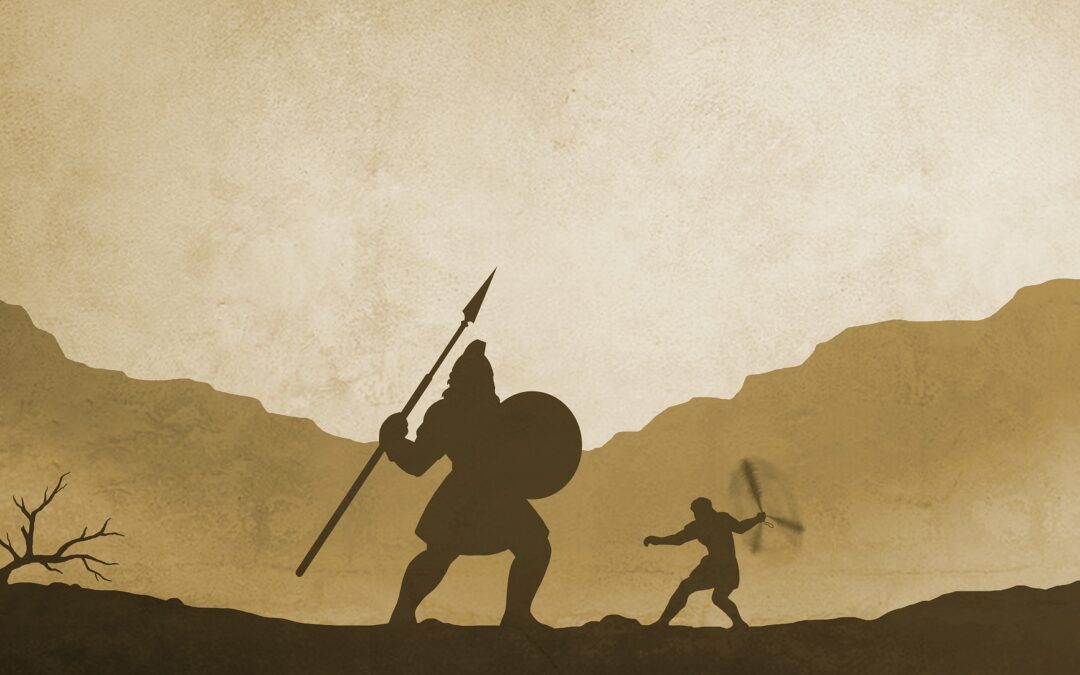 We’ve all heard the Biblical story of David and Goliath. A young shepherd who faces off against a giant and defeats him. It’s the ultimate underdog story and it’s been told to nearly every kid in America. But have we misinterpreted the real meaning of the story? We’ve assumed the story is supposed to teach us that anyone, no matter how small or weak, can defeat a giant if their cause is just. Although this is a heartwarming lesson to take from the story, I believe we need to dive deeper and challenge ourselves if we want to become modern day “Davids.”

We begin David’s story in the field. He’s a young man, a shepherd. He spends his days watching the sheep and protecting them from wild animals. The older brothers have gone off to war, and he is left to tend the sheep and make delivery runs of food. On one of his trips to the battlefield he sees Goliath taunting the Israelites and challenging them to a fight. David sees that none of the solders are brave enough to fight Goliath and he asks the king for permission to fight the giant. Here we pause the story and compare our assumptions to reality. Let’s go back the field – back to the young shepherd.

We’ve described the shepherd boy all wrong. Maybe it’s because we want the story to appeal to children – maybe it’s because we really love a good underdog story – but whatever the reason, we’ve been describing David wrong. We read in the story that he has killed a lion and a bear with his hands. The passage literally says “I seized it by its hair, struck it, and killed it.” Between his skill with a sling and his physical strength, David is a capable fighter. He is not the boy we imagine when telling the story to children. We hear of David’s sling and imagine a boy holding a slingshot knocking down empty soda cans, but in reality he is a trained killer (of wild animals, granted). When David asks Saul to let him fight the giant, Saul agrees and gives him armor to wear. Would a king send a weak child into battle? No. When David tries the armor on, we imagine a small boy drowning in armor 13 sizes too big for him. But David doesn’t say it’s too big – he says he’s “not used to them.” David is accustomed to being agile, and has become an expert marksman with a sling. If you have seen a real sling used, you’ll understand why David didn’t want armor. The act of using a sling requires a lot of movement, precision, and force. Finally, we read that David chose 5 smooth stones from the brook. Again, we imagine small pebbles, but they were not. They were large enough to crush the skull of a giant.

Here’s my point – we have assumed that the story of David and Goliath teaches us that “Anyone, no matter how small or weak, will achieve victory if the cause is just.” As if the stone David sent towards the giant was divinely blessed and God caused it to increase in speed and strike the right spot. Although aspects of this assumption could be true, the evidence shows otherwise. David was not a small boy, he was not weak, and his sling was not a toy. He had trained for years to become strong, practiced for hours to become accurate, and had proven himself repeatedly. The true message of David & Goliath is that a trained warrior, acting in obedience, will achieve victory.

We have real battles to fight and real challenges to overcome. Have you prepared? Have you become strong and achieved excellence in whatever your modern day “sling” may be? I’m afraid if we don’t take to heart the real message of David & Goliath, we will be arriving at our battles like boys with a slingshots rather than warriors with weapons.

To see the authentic strength of a shepherd sling, watch this video.

To see how I believe this challenge applies to our work in public policy, watch the video below!