Day of Prayer and Fasting – May 4th During the 2019 Legislative Session the SD House of Representatives adopted House Resolution 1003, which denounced the recent passage of New York’s abortion law and requested that Governor Noem declare a day of prayer and fasting to atone for the unspeakable crime of abortion. The Governor agreed, and has declared May 4th as a statewide day of prayer and fasting for all.

State of South Dakota Office of the Governor

Whereas, On the forty-sixth anniversary to the day of the Roe v. Wade decision, the Honorable Andrew M. Cuomo, the fifty-sixth Governor of the state of New York, signed into law an act that permits nearly limitless abortion of a child in utero, even in the last moments before that child’s eyes see the light beyond the womb; and,

Whereas, Life is sacred from the moment of conception. We know, by the eternal law and the evidence of history, that the destruction of innocent life cries out to heaven for justice. With all humility and in fitting fear for perdition, it is thus proper to bow before the unseen Author of all life and beg mercy in atonement for our sins and the sins of our countrymen, that the cause of our sadness might be lifted from this land and harmony among all restored; and,

Now, Therefore, I, Kristi Noem, Governor of the state of South Dakota do hereby proclaim May 4, 2019, as

A DAY OF PRAYER AND FASTING FOR ALL

In South Dakota and I respectfully request people of all creeds or none at all to observe this day with solemn mourning and pleas to heaven as best their consciences do direct.

In Witness Whereof, I have hereunto set my hand and caused to be affixed the Great Seal of the state of South Dakota, in Pierre, the Capitol City, this First Day of April in the Year of Our Lord, Two Thousand and Nineteen. 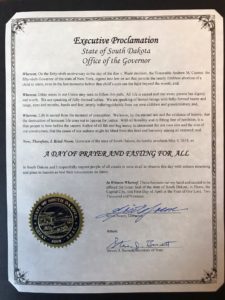 May 4 Day of Prayer Bulletin insert

May 4 Day of Prayer PowerPoint slide